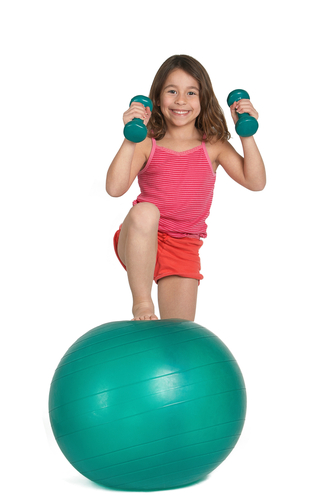 Following on from the last post I’ve had some questions regarding whether children who weight train hurt themselves. It’s a good news story, with no greater incidence of injury. In fact, active kids involved in sports such as soccer, hockey, skiing or skateboarding sustain many more injuries than for any children who have been involved in weight training.

On the other side are children who get no exercise at all. The decline in physical activity in kids is a real concern to all health professionals. Since 1981, there’s been a tripling in obesity rates among children. It’s partly due to nutrition, but also changes in physical activity. There are simply many more sedentary possibilities for kids in the form of computers, game consoles and television. There are lifetime postural considerations to childhood inactivity and computer and television recreation is non-physical. This takes away from the limited time that kids have for physical activity. Far better to have a minor and temporary setback from being physically active than the gradual deterioration and long term health concerns from inactivity and obesity. It’s not about total avoidance of these sedentary activities but guided moderation.

Parents should be aware that bone mineral density peaks around age 20 and the main reason the new Canadian Society for Exercise Physiology (CSEP) guidelines advocate for more strengthening activities is to help kids build up and bank more bone density. That way the natural, moderate bone loss of aging is unlikely to reach the levels associated with problematic osteoporosis. I have written numerous educational posts on osteoporosis which you can access here.  http://www.west4thphysio.com/archives/category/osteoporosis

So in summary, with good supervision children can and should do harder physical exercise which can include weight training. It is a wonderful complement to other sports where additional strength can be both an injury preventer and an advantage. Most sporty kids are tuning in to that concept around age 10 to 12. They shouldn’t overdo it or go too hard and three times a week is plenty, even if it becomes something they truly enjoy. Also, it’s not a competition with their lifting friends! Generally, for any given exercise, they lift a maximum of 60% of their one rep maximum for that exercise. That keeps them in the safe zone and they’re less likely to drop a weight on a toe.

One Response to Children and exercise – Part 2