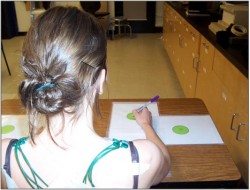 Whiplash injuries are common worldwide. In BC we have more than 60,000 motor vehicle related whiplash injuries per year.  Some people recover quickly, while 40-60 percent of people are still having neck pain 6 months or more after their injuries. Why is this?

In an effort to improve understanding of persistent neck muscle complaints post whiplash, I recently completed my Master of Science in Biomedical Physiology and Kinesiology at Simon Fraser University and chose to study upper trapezius activation before, during and after a repetitive upper limb task, in healthy women and women with neck pain persisting for at least six months following a motor vehicle accident. The task involved sitting at a table, with the non-dominant limb resting on the table while the participants marked target circles prearranged on the table in the form of a triangle, at a rate of 88 beats per minute. Muscle activity was also measured while the volunteers stood still for five minutes before and after the repetitive task.

Previous studies in this area had conflicting findings and the current classification system used in research, whiplash associated disorders (WAD) 0-4, is very broad. Some researchers found people with whiplash had excessive muscle activation and some found they had less than normal. Being a physiotherapist, I hypothesized that if the WAD2 group was subgrouped then the picture would become clearer. People classified with the injury WAD2 have been shown to have a variety of problems post whiplash that vary greatly from person to person. All tend to have problems recruiting their deep neck flexor muscles and overactivation of their surface neck flexor muscles, which is believed to be a reflex change related to neck pain. Most have restrictions in active neck mobility. Some people experience significant levels of psychological distress associated with clinical anxiety or depression.  Others suffer from post-traumatic stress disorder and may also have changes in the way their nervous system processes pain, causing them to be hypersensitive to touch, pressure, heat and or cold.

It is important to note that abnormal upper trapezius activation patterns were found in women with various levels of disability and with various associated clinical signs and symptoms and that, some women showed patterns of excessive recruitment during the task.  A diagnosis of whiplash only tells you the mechanism of injury. Your health care practitioner should be examining you thoroughly and treating you according to their specific findings.  Not all whiplash injuries will present in the same way.  The full thesis document is available for download, if you would like to know more. If you have questions regarding my research or clinical questions feel free to email me at marj@w4pt.com

The full thesis can be read here.  MarjBelotMScThesisWhiplash2009

This entry was posted in Head and Neck and tagged injury, neck, whiplash. Bookmark the permalink.